Scott was made in Gander, NL; was welcomed to the world here in Moncton and then proceeded to grow up across the pond in Riverview. His stage debut was at Riverview High where he was a cast member in two musical productions. During his first year at Mount Allison, Scott was a cast member of yet another musical production but decided to curtail his stage activities to focus on, well, passing courses. After a short 20+ year hiatus, Scott returned to the stage in 2011-12, acting in two local Dessert Theatre productions.
Skin Flick marks Scott's debut with Hairy Tease Productions, where he was hand picked among thousands of hopefuls at an open audition to play the role of Alex Tratt. Following this production, Scott will be placed in the "Sleazy Actors Protection Program" and will be living in an undisclosed location.
In real life, Scott plays his most important roles of husband to wife Kerry and Dad to their three children.
Favorite Harry Tease quote: "And now lets go have a look at Mr. Walker's colon."
Byron, Skin Flick 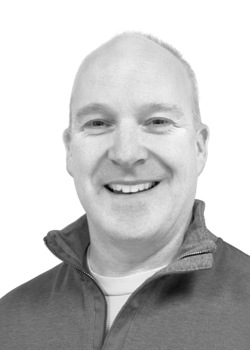