Michael Granville, a native of St. Stephen, N.B., began teaching English at Harrison Trimble High School in 1972 and was involved in producing / directing theatre productions there (as well as teaching Theatre Arts) up until his retirement in 2003.  Having enjoyed the challenge of directing teenagers in numerous musicals, dramas and comedies over the years, he says he inexplicably experienced a somewhat masochistic urge to continue his theatrical involvement in the adult community after retirement.  Thus in 2004, Hairy Tease Productions was born. After presenting the first three plays on the tiny stage at the Moncton Lions Senior Citizens Centre, he was overjoyed when Theatre l’Escaouette invited Hairy Tease to produce The Foreigner in their state of the art facility. Having now completed many very successful shows in their new home, Mike looks forward to many future productions with his most excellent 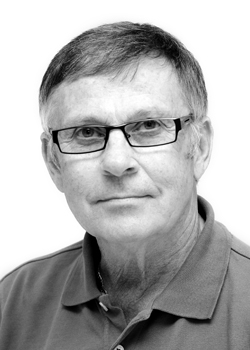