Lynne has been acting since she was 8, when her elementary school did a production of The Frog Prince and she was the only kid on stage with dark hair who wasn’t too tall to play the Italian doll.  There have been many shows of all sizes and types since then, but she’s never had as much fun in front of an audience as she has with Hairy Tease Productions.  Her Hairy Tease highlight reel includes sharing the stage with her husband for the first time in almost 20 years as Claire and Lenny in Neil Simon’s Rumors; taking Hairy Tease on its first foray into drama with 2009’s one-act play, The Wooden Pear; and celebrating her 40th birthday in front of a sold-out crowd in No Sex Please, We’re British.  She loves playing dress-up on stage and thinks it’s fun to pretend to be someone else once in a while.

When she’s not on stage, she’s a User Experience Researcher and Taxonomist with T4G Limited, wife to Lawren and proud mom to Benson and Ellie.  She’s also been known to act on camera every now and then.  She has a soft spot for high school theatre nerds (having been one herself), so she loves handing out Hairy Tease bursaries in the spring. 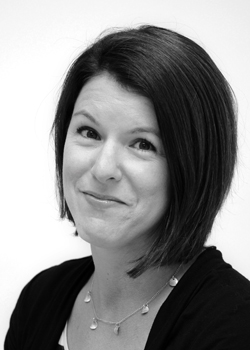