Born and raised in , Liam moved to Riverview in 1987 and city life began. Liam was always spelunking in the FANTASTIC theatre during his time at . (Thanks Mrs. Cormier!) He chased a girl over to Harrison Trimble and ran amok of Mr. Mike Granville. He somehow convinced Mike to cast him in HTHS shows in grade 11 and 12…. Despite his stellar behavior on a school trip to .

After a brief stint at St. F.X., where he was in every production put on by Theatre Antigonish, he decided that academics weren’t where his future lay. Liam moved back to and got connected to a local casting director for TV and Film. (This was after a Gawd awful audition for TNB.) He got to work on a few CBC short films and a short lived series Daring and Grace. Deciding that he needed further training, if he was going to be serious about pursuing acting, he took the plunge and moved to where he studied at in their full time acting program. After graduation he went on the study with many other professionals in the market.

Liam moved home to Riverview in 2005 and spends most days acting like a Wine Guru at his family’s business The Good Guys Brew Shoppe. He also got reconnected into the Maritime film scene and has been working regularly in TV and film since his return. He ran into Mike Granville again and got swept up into Mike’s new endeavor called Hairy Tease. He’s appeared in 3 productions; The Nerd, Love Sex and the I.R.S., and The Foreigner. Look for Liam in “The Wooden Pear” part of the upcoming Hairy Tease production of one act plays. 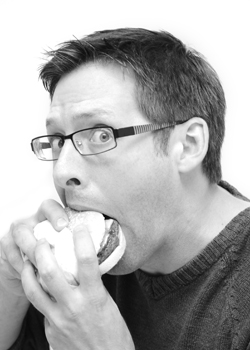