After spending time as a high school Phys. Ed. teacher in Petitcodiac, Kevin became the owner/operator of CrossFit Moncton. Even though he had never officially acted before joining Hairy Tease, he believes his teaching experience prepared him well, since teaching is 10% planning and 90% acting. He also had a brief television appearance on The Price is Right with Bob Barker. After attending virtually all of Mike Granville's productions, Kevin was very excited to be standing on stage "sans pants" in Who's Under Where? This was not his first time in front of an audience in his scampies. He once ran for president of his residence at UNB in his underwear...and won!  After playing a policeman in Never Too Late and a hilarious role in Mirth and Melancholy, Kevin returned to HTP in his first major role as Clayton in The Mind with the Dirty Man. He later appeared in The Foursome, Mirth and Melancholy II, Mirth and Melancholy IV and Weekend Comedy.

Sebastian, Who's Under Where? 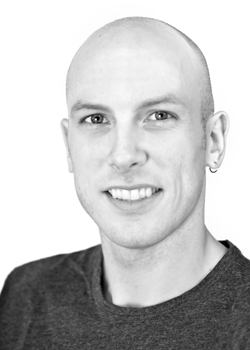