Geoff was born in the U.S. but from the tender age of 18 months was raised in the Maritimes, primarily New Brunswick. His transient lifestyle settled a little when he landed in Moncton at age 13. While attending Harrison Trimble he appeared in numerous musicals and plays and since he enjoyed acting and had no real skills, decided to pursue a career in acting and went to Ryerson Theatre School. Acting would seem not to be a main career choice however.  Years later, Mike took a chance on him and he has appeared in several Hairy Tease productions, including Send Me No Flowers, The Nerd, Love, Sex and the IRS, The Foreigner, Playing Doctor and Who’s Under Where?

Favourite Hairy Tease quote: “Great.  What is Mr. Spinner going to say when the girl my wife used to date walks in?” 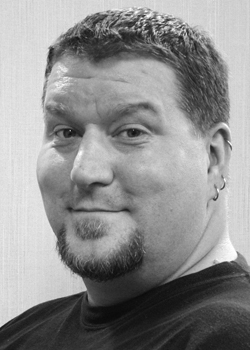