Born to wandering gypsies, Erik had to learn to ballroom dance to pay for med school. Well...not really. Being a 'class clown' gave Erik an appreciation for the stage. In high school he participated in most productions and was a founding castmember of Mike Granville's first plays. University saw more time spent in the college pub rather than in the library but he managed to keep some stage work up with various stand-up comedy routines as an after-dinner speaker. His stage career was derailed for a number of years while living abroad. Upon his return he hooked up with Mike Granville again and was eager to participate in Mike's first excellent stage adventure, Send Me No Flowers. Erik's roles have been progressively less socially acceptable but equally enjoyable. As they say "life imitates art". Erik has a very patient and beautiful wife, Caroline, and three of the cutest little girls to walk the face of the earth - Katie, Abbie and Sarah. 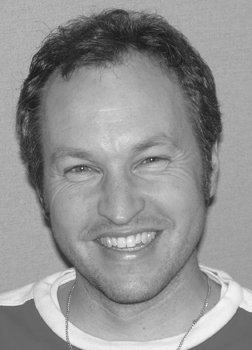