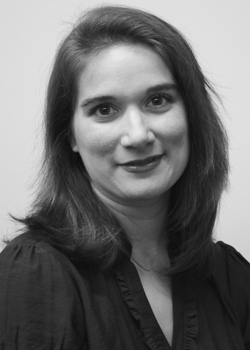 Aloma got her first big break as Snowflake #1 in a summer production of Silent Snow, Secret Snow when she was 7. The acting bug followed her through the rest of her school days in Bathurst, NB and on to Carleton University in Ottawa where she obtained a journalism degree between shows. After graduation she continued to participate in community theatre in Quebec City and London, England and joined the Hairy Tease crew upon moving to Moncton in 2004. Aloma was the mostly efficient sound operator for Send Me No Flowers and The Nerd and returned from her honeymoon with her patient and understanding husband Greg in September 2005 just in time to join the cast of Love, Sex, and the I.R.S. She appeared in every Hairy Tease production since then until the birth of her 1st child, Tennyson, prompting as much-needed hiatus.

Favourite Hairy Tease quote: "Ellard, you couldn't catch a chipmunk if all its legs were broken and it was glued to the palm of your hand!"
Catherine Simms, The Foreigner